Trinamool Congress on Sunday alleged that PM Modi’s trip to Kedarnath temple in Uttarakhand was a violation of the Model Code of Conduct (MCC).

The party has also complained to the Election Commission over PM Modi’s spiritual trip as Lok Sabha polls draw to a close.

In the complaint filed by TMC leader Derek O’Brien, the party said that despite the end of the campaigning in Lok Sabha elections, PM Modi’s “Kedarnath Yatra is being covered and widely televised for the last two days in all national as well as local media”.

“This is a gross violation of the Model Code of Conduct. He even announced that the master plan for the Kedarnath temple is ready and also addressed the public and the media at Kedarnath. lt is absolutely unethical and morally incorrect,” Derek O’Brien said.

The TMC leader also said that PM Modi’s activities were being covered in minute detail and is being widely publicised “with an ulterior motive to influence voters directly and/or indirectly”.

Derek O’Brien also said that the “Modi Modi” chants were also being heard in the background.

“All these moves are well calculated with the ill-intention to influence the voters even on the date of poll,” Derek O’Brien said.

He further asked the poll body to take immediate action and stop telecast of such “surreptitious and unfair campaign which is also morally wrong. 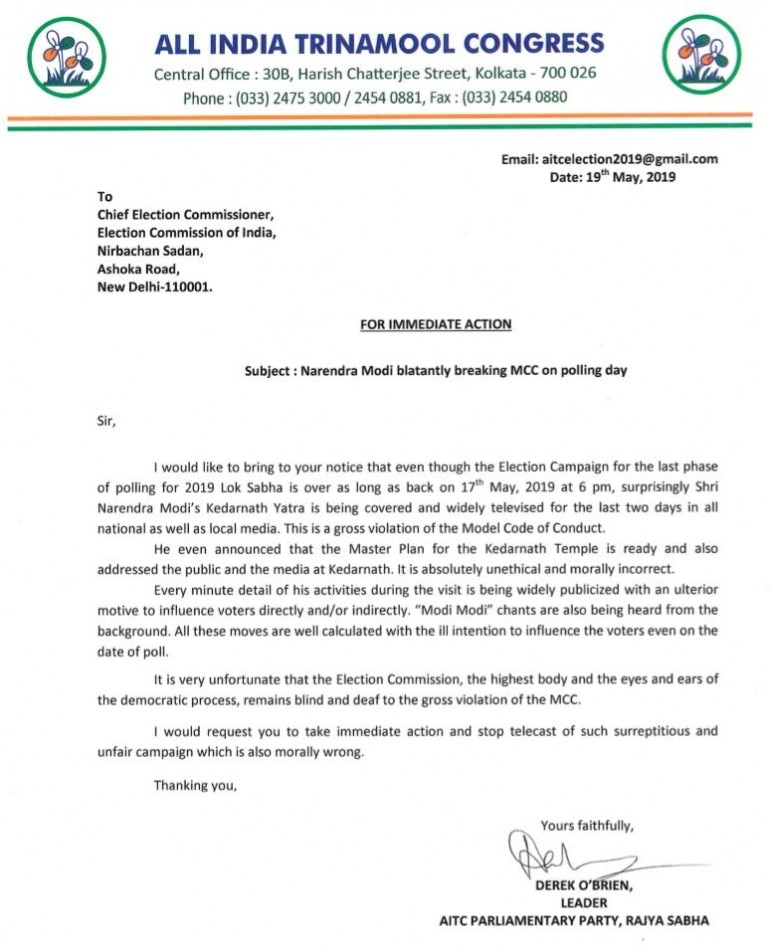 PM Modi on Saturday embarked on a two-day visit to Kedarnath and Badrinath.

PM Modi started the trip with Kedarnath temple where he offered prayers at the Himalayan shrine and he went inside a cave nearby to meditate.

Television channels showed his photographs in which he was wearing a saffron shawl.

His trip has drawn a lot of criticism from the Opposition leaders.

Congress leader and Rajasthan Chief Minister Ashok Gehlot said, “Today he is sitting in a cave wearing ‘bhagwa’ (saffron). God knows, what message he wants to deliver. Everybody has been watching him,” said Gehlot, who also accused the prime minister of doing “nothing but polarisation”.

“True devotees sacrifice their ego and arrogance before going to the abode of God, not after laying a red carpet. Modi ji, hope you know that much,” Surjewala said on Twitter.

PM Modi reached Badrinath this morning, which is another temple in Uttarakhand’s ‘char dham’ religious circuit.

Coronavirus: India To Take Steps For Evacuation Of Indians From Wuhan; Sri Lanka…

Radio-collar the captured tuskers, release them in congenial…

Anil Kapoor Said: Fitness is a way of life for me

UP Luxury Hotels, Bars To Be Allowed To…